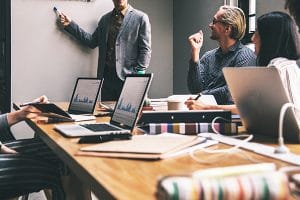 Should office investors be wary of tech office tenants adding sector risk to their rent rolls?

The tech industry has become a powerful engine driving demand for office space in markets across the country from Silicon Valley to the emerging “Silicon Slopes” of Utah. Do tech office tenants have plenty of gas in the tank for more growth, or should investors be wary of taking on too much tech sector risk?

Industry data consistently points to tech firms as being the top driver for office space across the U.S. According to Cushman & Wakefield, tech firms accounted for more than one-third of office leasing in the U.S. in Q4 at 34.4% of the total volume. JLL reported similar results with the tech office tenants topping the leader board for volume of new lease deals. Based on new lease deals above 20,000 square feet the firm tracked last year, the tech sector edged out coworking firms by leasing 23.7 million square feet of space in 2018. JLL also noted that, despite hiring and talent shortages in nearly all primary and secondary markets, leasing activity is showing few signs of a slowdown.

Demand from tech firms has been welcome news for landlords who are looking to fill space in a market where the broader trend of using space more efficiently and increasing density is still all too common. Tech firms are not only filling space, but in many cases, they also are helping to drive rents and building valuations higher.

For example, San Francisco has benefited from its thriving tech sector that has produced major startups that include the likes of Twitter, Dropbox, Uber and Airbnb among others. That expansion is fueling rising rents for both office space and rental housing. In fact, the San Francisco Chronicle recently reported that the office sector hit a new high price for rental rates last fall at $81.25 per square foot, finally breaking the previous record of $80.16 that was set at the end of  the dot-com boom in 2000.

Yet the latest tech boom also is stirring up a sense of déjà vu related to the dotcom bubble that burst nearly two decades ago, which ended up pushing the U.S. economy and the commercial real estate market into a mild recession. Is the market on a path to repeat history, or are there some distinct differences that are helping investors get comfortable with tech risk?

Certainly, any sector is susceptible to a potential downturn. One key difference that helps to mitigate current risk is that the new tech economy that we live in is part of a broader secular shift. Technology is pervasive and seeping into all aspects of business from retail and e-commerce to entertainment, banking and manufacturing.

At the same time, tech has expanded far beyond the traditional tech hubs, such as Silicon Valley, San Francisco and Boston. There are thriving tech markets in virtually every major metro around the country. According to CBRE’s 2018 Scoring Tech Talent Report, the top markets for tech talent in 2018 included:

A second key difference is that, hopefully, there were some important lessons learned in the previous dotcom crash. One of the obvious problems was capital pouring into dot coms that resulted in start-ups that got rich quick with IPOs and soaring stock prices. Many dot coms simply grew too big, too fast without a lot of substance – or tangible assets – behind the curtain. Those failures shined a spotlight on the importance of simple underwriting, both in financial markets and among real estate owners and lenders.

The broader secular shift to a more tech-driven economy does mean that investors and lenders need to sharpen their due diligence and underwriting skills. In addition to evaluating tenant credit, it will be increasingly important to understand the nuances within specific segments of tech, an area many landlords are unfamiliar with.