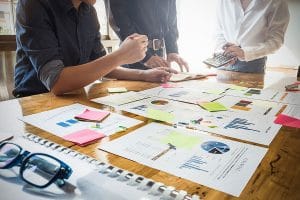 Even as economists continue to debate exactly when a recession is likely to emerge that will put an end to the current record-breaking cycle, there is clear data that the much anticipated slower growth has already arrived.

The latest Q3 2019 market update from Reis highlights the slowing economic growth, and ultimately, what that means for the near term outlook on commercial real estate property fundamentals. “It should come as no surprise that we are in a downward trend in terms of GDP growth,” said Victor Calanog, PhD and head of CRE Economics at Reis, in the firm’s recent quarterly briefing call.

Advance estimates for Q3 put GDP growth at 1.9% as compared to the 2.9% GDP growth rate for 2018. A slowdown was widely anticipated following the “sugar rush” of tax cuts that lifted the economy last year, noted Calanog. However, the economy has slowed more than the 2.0-2.2% that Reis had originally predicted for 2019.

We are concerned, but not worried given that several measures of the economy are relatively strong

According to Reis, business investment in structure or equipment declined for the second straight quarter. The ongoing trade war is likely causing businesses to hold back on short term spending on hiring, as well as new investment in real estate. “We are concerned, but not worried given that several measures of the economy are relatively strong,” added Calanog. Although job creation is slowing, employment is high and consumer spending remains healthy.

Why Sellers Should Run Due Diligence Too

JLL Chief Economist Ryan Severino offered a similar take on the economy in his recent Economic Insights update. He emphasized the point that, even though economic growth is slowing, it is not plummeting or imploding. In fact, there are some positive indicators coming from recent data releases. For example, many company earnings releases for Q3 have surprised to the upside. The ISM nonmanufacturing index increased during October, exceeding expectations and supporting the case that the services sector of the economy is, at least so far, withstanding the slowdown occurring in the manufacturing sector. In addition, Severino noted that the consumer sentiment index’s preliminary reading for November showed a slight increase, which suggests continued optimism among consumers.

At the risk of sounding like a broken record (or streaming service for the younger readers), commercial real estate continues to fare well

“At the risk of sounding like a broken record (or streaming service for the younger readers), commercial real estate continues to fare well,” noted Severino. Although demand for space has moderated, there are no signs of meaningful deterioration across major property types or markets. In addition, limited supply should keep fundamentals in a relatively strong position, even as economic growth continues to slow in coming quarters, he added.

Apartments: Vacancies held firm in the first three quarters at 4.7%. However, Reis is predicting a slight uptick in vacancies in fourth quarter due to a combination of higher levels of new completions and weaker seasonal demand. Effective rents are expected to moderate in 2019 to an annual growth rate of 4.2%.

Office: The office sector remains sluggish for a variety of factors, including less demand for space due in large part to more open office formats and flexible work-from-home options. Vacancies rose 10 basis points to 16.8% in the third quarter, which only 80 basis points below the cyclical peak in 2010. Rents continue to creep higher. Reis is forecasting annual effective rent growth similar to 2018 at 2.8%. In addition, there is disparity in office sector fundamentals, notably with CBDs that are outperforming suburban markets.

Industrial Warehouse/Distribution: Uncertainty related to the trade war and impact on supply chains is manifesting itself in weaker demand for industrial space. Vacancies continued to inch higher, ending the third quarter at 9.8%. Reis also noted a marked deterioration in effective rent growth over the past year.

Retail: Vacancies for neighborhood and community centers declined slightly to 10.1% in third quarter. Reis is forecasting an annual increase in effective rents for 2019 at 1.5%, which is the weakest showing in nine years. Mall vacancies rose to 9.4%, which matches vacancy levels at the height of the downturn in 2011. However, there also is a big performance gap between the haves and have-nots. Specifically, top malls owned by Simon and Brookfield (formerly GGP) are outperforming their peers.

Two major headwinds that Reis will continue to monitor closely in the coming months are:

Calanog also cautioned that another “canary in the coalmine” to watch that could signal further slowing in growth – or an inevitable downturn – is negative job growth due to its strong correlation with consumer spending.