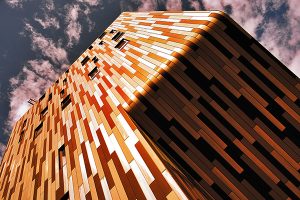 Hindsight is always 20/20, and office building developments need to be designed today so they have staying power to meet the needs of office tenants in the decades to come.

There are plenty of disruptive technologies already on the doorstep that are changing how and where work is conducted, not to mention the amount and type of space tenants require. For example, office building owners and developers are keeping a close eye on how tech such as the Internet of Things, Artificial Intelligence and the next generation of 5G wireless will impact utilization and take “smart buildings” to a whole new level.

The commercial real estate industry has already seen the likes of LEED and WELL certified buildings introduced to set standards for sustainable and wellness. Could tech be the next benchmark for commercial property owners?  Building owners in Chicago seem to think so. Some landlords in that city are adopting Wired Certification standards. According BisNow, 25 Chicago buildings have either attained or are in the process of securing Wired Certification based on a model created by WiredScore.

New office building development projects are taking the future of tech and transit into consideration. Developers of the $1.5 billion Frisco Station are working to future proof the new master-planned community. According to Government Technology magazine, the 242-acre development, which includes office space, apartments, hotels, retail, restaurants and entertainment, will be one of the first in the country built from the ground up with infrastructure for 5G.

Frisco Station also is expected to design its street grid and parking with an eye on the pending arrival of self-driving cars. Silicon Valley-based Drive.ai is already testing self-driving vehicles at Frisco’s Hall Park office campus. Even more futuristic, Uber is reportedly considering Frisco Station as a future location for a transit station that could someday accommodate its flying “air taxis”.

Although air taxis may be a tough concept for some to wrap their heads around at this early stage, self-driving or autonomous vehicles (AVs) are a bit more tangible. AVs are moving forward with beta tests in select cities around the country. For example, Google launched a self-driving car project nearly a decade ago which was later spun off as Waymo, a separate subsidiary. According to a CBRE research report on Autonomous Vehicles: Driving Change for Real Estate, investment in AVs totaled $80 billion between Aug. 2014 and June 2017 with AVs that are being tested on public roads in select cities around the country.

Certainly, there are plenty of hurdles ahead before AVs are ready for mainstream America, including cost, safety and government regulation. However, that hasn’t stopped some office developers from taking a forward look at how to prepare buildings. For example, some buildings are creating curbside drop-off areas for passengers and e-commerce delivery that replace traditional parking lanes. Others are even beginning to construct offices with internal parking structures that could be converted to office space in an effort to future-proof their properties.

For example, an article by the L.A. Times noted a Bellevue, Wash. office building development constructed by Trammell Crow in 2015 where the parking garage was built so the subterranean levels could eventually be converted to an alternative use. However, the article also noted that most developers are reluctant to make those structural changes due to the added cost, which is about 17% higher compared to building a traditional parking structure.

Office developers and owners may want to take note of the changes occurring within the retail sector. Malls that once built giant parking fields to accommodate peak traffic during holiday shopping are now leveraging surplus parking to carve out more space for new development that is creating “densification” and added value to projects with additional retail and restaurant space, as well as components common to mixed-use developments that include housing, hotels and office space.

Even though office developers might not agree on what the future holds for tech or transit, it is difficult to ignore the lightning-fast speed of innovation that has become the norm. Given that backdrop, the best future proofing strategy may simply be keeping an open-mind to consider what might be ahead and designing buildings that are flexible to handle what might be coming next.